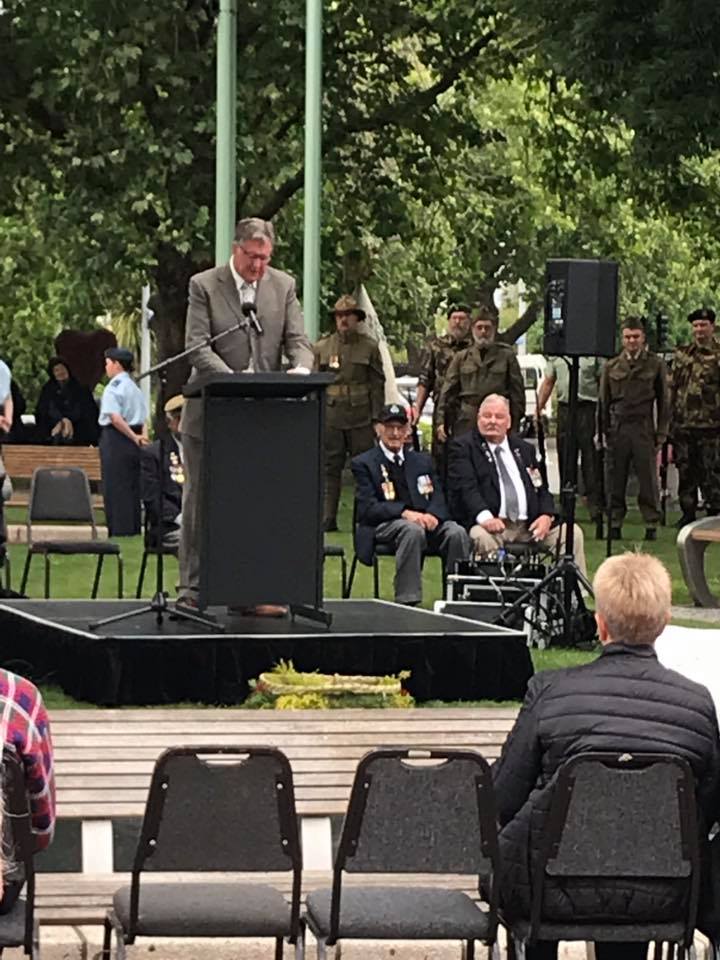 Commemoration for the 100th Anniversary of World War One at the Hastings Clock Tower, 11 November 2018, by Rick Barker

My first recollection of Armistice Day was as a young boy, about three or four years old.  My grandmother who bought me up explained that soon, I was going to have to be quiet as we were going to remember.  It was the end of the war, the 11th hour of the 11th day of the 11th month.  She took down off the mantel piece the photo of her brother Willie, held it and me as we waited.  When the radio chimed 11 o clock, my grandmother began to cry and she cried and cried.  I remember thinking how can someone as old as grandma be so up set about something that happened so long ago.

I am the only member of the family to have been to Gallipoli, where I searched for the grave of William Fowler.  There was no grave as my grandmother thought.  His was name on a wall, a name among many, for whom there was no known grave.

The telegram advising of Willie’s death was almost as brutal as death itself.  We regret to advise of the death of William Fowler who died in action at Gallipoli, on.  He died serving King and country, signed.  Grandma mourned the loss of Willie all her life, the pain ever eased.  She was one of millions.

The 11th hour of the 11th Day of the 11th month 100 years ago was followed by celebration.  The madness had stopped.  But then there was the silence.  Silence at the bewilderment of the losses.

The Hastings war memorial lists 262 names of killed in action.  Three times this would have returned with physical injuries.  Many more were scarred by the war, by what they had witnessed by what they had endured.

The population of Hastings in 1916 was 7,900 people.  That means for every 100 people in our city, three were killed in the war.  11 out of a hundred of our people were either killed or came home alive but wounded.  These are unimaginable figures today.  Unimaginable suffering for our community.

A sorrow that lead the nation to erect memorials to the fallen, to the Great War, to the War to End all Wars.  Sadly, the hope that it was the war to end all wars was not to be.  Memorials were not to glorify war, they were memorials to express the weight of enormous loss, to be reminders, to encourage reflection so that the lessons would not be forgotten.

There was a silence from the returned.  They never spoke of what they endured.  How could they convey the horrors of the mud, the blood, the rats, the noise, the fear, the pain, the suffering and the hideous deaths.  They believed what they had endured was beyond comprehension by others.

Then there was the silence of those that remained behind.  No one wished to speak of these things to disturb the daemons.  It was difficult enough to cope with the nightmares of the husband, son, father who had returned home.  The changes wrought in the veterans was incomprehensible.  They called the suffering ‘shell shock’.  Today we would say PTSD – Post Traumatic Stress Disorder.  For the families of the veteran there was no specialist help.  They alone carried the burden of caring for those who returned and it was an enormous burden.  Again; it was a burden carried in silence.  It could have been worse, it was thought, as some kind of consolation.

To the veterans and their families we have a deep debt of gratitude.  A debt that can only be addressed by remembrance.  The Hastings Library memorial says it succinctly

Our freedom was bought by a price that others paid.  As you pass through here remember.

My schooling helped with the remembering.  We were all instructed in the poems from World War One, the more memorable for me was by John McRae

In Flanders fields the poppies blow
Between the crosses, row on row,
That mark our place; and in the sky
The larks, still bravely singing, fly
Scarce heard amid the guns below.

We are the Dead. Short days ago
We lived, felt dawn, saw sunset glow,
Loved and were loved, and now we lie
In Flanders fields.

Take up our quarrel with the foe:
To you from failing hands we throw
The torch; be yours to hold it high.
If ye break faith with us who die
We shall not sleep, though poppies grow
In Flanders fields.

My grandmother had three themes about keeping the faith with those who died.

Firstly; we must never forget.

Secondly; good must come from the pain – the world must be a better place.

Thirdly; we must understand the causes of war and ensure the suffering is not repeated.

On the first, my grandmother would be heartened.  This memorial today.  The numbers observing ANZAC day are growing.  The teaching at schools and the writing of the students is impressive.  We haven’t forgotten.  We are respectful, as we should be and as we must.

As for the good, there has been some.  After the calamity of the Second World War the United Nations was created and its founding principle was to make war illegal.  War was for the first time in human history is no longer a legitimate tool of foreign policy.  It has been imperfect but it is a start.

Here at home Sir Owen Woodhouse wrote his ground breaking report on ACC, for no fault compensation, just care for the injured, as a result of his war experiences.  He said that he had seen so much agony, lost so many friends that when he was given the opportunity to make the country a better place he took it.  His report leading to reform of ACC is his memorial to his fallen comrades.

But have we learned the lessons on the causes of war, on this my grandmother would be deeply troubled.  Her generation suffered the consequences of extremism, the row upon row of white crosses on fields scattered around the world, so they pushed back against extremes, always seeking agreement at the center.  They sought community well-being ahead of personal interests.  It was we, not I.   As President Kennedy said – ask not what America can do for you but what you can do for America

Today it seems some have forgotten the lessons and the pains suffered as we are witnessing a surge at the extremes; fundamentalism is on the rise in almost every faith, whether it be Christian, Muslim, Hindu and so on.  We are seeing the move out from the center to the edges.  We are witnessing the rise of so-called strong leaders around the world, you will know all their names – and the re-emergence of extreme right wing parties.  We are seeing the swastika being paraded around here in our community.   And conversation is now dominated by I, or me, ahead of we.   This is would be deeply troubling to my grandmother.

I remain the optimist.  To have faith in the future we must have faith in ourselves.  Each one of you will be here for a reason.   Doubtless your family will have lost because of war.  You are each here to remember and to pay your respects.   And we can all play a part in creating a peaceful world.  To push back against extremism.  To speak and act in tolerance and to search for understanding.  To bring people together not to push apart.  We must make the world a better place, bit by bit, in our families, for our neighbours and in our community.  As Martin Luther King said, its always the right time to do the right thing.  And our nation has a proud role in its peacekeeping efforts.  Criticised by some for having a military for peace and somehow being unfit for war.  On this the Bible is exactly correct – blessed are the peace makers.

Let us all be peace makers, let us all remember, and to keep faith with the fallen.

We will remember them.